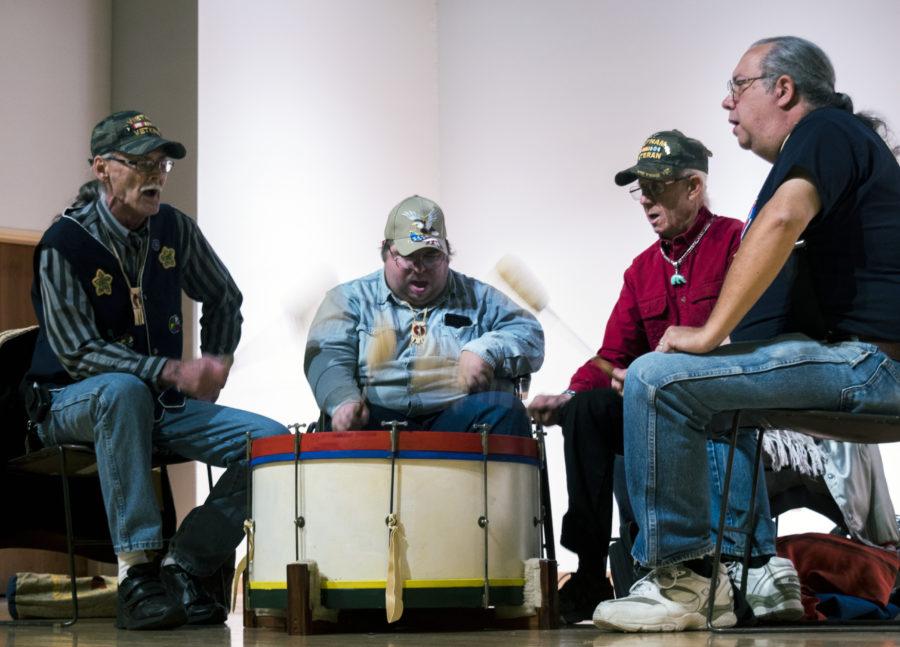 Words and Photos by Angelo Angel

Inside the Kent State KIVA center, a rhythmic chant and drum beat engulfed the auditorium with spectators observing keenly. A large drum encircled by four men and women vocalist, who aid in certain songs, were the source of this sound. The men cried out in booming, baritone voices; mezzo-soprano voices from the women blended harmoniously with them. All these vocalizations along with the steady drumbeat set the foundation for songs that commemorate and honor Native American heritage.
Nell Orndorf, who is of Delaware and Blackfoot heritage, helped bring the Red Circle of Drumming to Kent State as a way to celebrate Native American History month.
“(This event) means a celebration, a spiritual gathering to carry on our heritage and to let people know that the Native Americans are still alive and well,” Orndorf said. “And we’d like to get more students and faculty involved in the Native American culture.”
Coming back for its second year to Kent State, the Red Circle of Drumming orchestrated a celebration of Native American history and an opportunity to learn through its descendants.
“We wanted to bring a traditional native group to campus to demonstrate what the culture is about and to share the roots and history.” Michael Daniels, Kent State Multicultural Center program director, said about the event. “ Ross (Davidson) knows a lot of Ohio and the tribes that have been in Ohio so we wanted to bring someone to talk about the connection to Kent and the area.”
Ross Davidson, the leader of the Red Circle of Drumming, along with the other members, shared history lessons and personal anecdotes with the audience. From filling the auditorium with the spirituous yet somber Veteran songs, to describing how they painted a certain infamous U.S. general statute with the color pink: his name rhymes with mustard.
The Red Circle of Drumming group has a long history of performing for various occasions and events, eager to enlighten individuals on their heritage.
“One day our drum keeper, Ross, sat some of us down at the drum and said ‘we’re going to do this’ and it’s a process of sitting down and learning how to use the sticks, using your voice and putting it all together.” Rob Robinson, a member of the Red Circle of Drumming, said. “And we’ve been doing this on this particular drum for 11 years.”
Near the end of the pow wow, the drumming circle invited the audience to encircle them to participate in a song. Giddy attitudes and gumption were prevalent among the participants during the dance circles; feet stomped rhythmically side to side to accompany the Red Circle of Drumming performers.
Pow Wows are social gatherings held throughout many different Native American communities and is a way to meet and dance, sing, socialize, and honor their cultures. And to Rob Robinson, the gathering is important to the Native American community.
“We’re sorta like servants of the people. Just like a spiritual leader would be or a minister,” Robinson said. “We have songs for whatever the need is, whether it be for someone who’s passed, someone who’s been born and everything in between.”