Being Black At A PWI 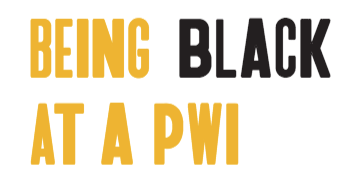 Going to college is already a complex and rigorous journey for students. From understanding how to receive the most financial aid, to balancing a social life with academics, it can be overbearing for anyone. For some students, however, the journey is even more complicated for reasons out of their control: their race.
If someone identifies as African American or black, they’ve already beaten one of many statistics by attending college. According to the National Center for Education Statistics, only 34.9 percent of black students attended college in 2015. However, beating the odds stacked against black students is only the first step in being successful.
Out of the thousands of universities and colleges that exist in the United States, most of them are labeled as a PWI or predominantly white institution. These are institutions where the community make-up has more white people than any other ethnic group on campus. Historically, PWIs have been places where black students must compromise their blackness just to be accepted and recognized.
In 1945, African Americans were limited by where they could go for education due to the control of wealth and power by white people. It wasn’t until pioneers like Thurgood Marshall took a stand against the “separate but equal” claims of the Supreme Court, that resources for African Americans slowly became available.
These racial differences and events have not stopped in the 21st century either. As recent as last August, racially charged incidents are still happening on college campuses. The most infamous, as of late, was the Neo-Nazi rally that took place on the University of Virginia’s campus in Charlottesville, Virginia.  Many people were severely injured and someone was even killed.
In the same way that Africa has the most genetic variation in the world, black students, faculty and administrators have various ways they navigate their blackness in a space that was not designed for them. Here’s a glimpse:

Eugene Shelton, Journalism and Mass Communication Professor:
Q: What’s your experience been like being a black man on a predominantly white campus?
A: My experience started before I was a student at Kent State. I grew up on the East side of Cleveland, and I was always in a predominantly black environment. The white world existed only through what I saw on television. I received a scholarship for a summer journalism program [at Kent State] and for the first time…I’m the only African American. It was very clear that I was different. Some of them didn’t like me there; pranks were played, names were called. It was a very unpleasant experience. I was contemplating leaving simply because this isn’t worth it, these people are crazy. What made me stay was when a professor read my lede as a good example. That’s all I needed to hear. Since then, that’s been my experience at Kent State. I’m the only African American. What I experienced as a teenager, I experienced the rest of my life. It requires you to have thick skin and a great deal of confidence in yourself. They don’t want you? So, what? You need to be here.
Q: Do you think it became an “us versus them” mentality while you were here?
A: I don’t think it was an “us versus them,” that’s just how they were raised…But I think you have to be selfish if you’re a person of color on this campus and not let that interfere in any way with your goal here…to get a degree, not be liked. That doesn’t mean let them disrespect you. You have to stand up for yourself.
Q: What are some tips you have for African American students who are interested in attending PWIs?
A: Take advantage of the situation you’re in. Stay focused on why you are here. That other stuff is not what’s important. That would be my words of encouragement; don’t let others derail you from your goals and accomplishments in life. You have to believe in yourself enough.
Q: Do you think your experience would’ve been different if you attended an HBCU?
A: I never thought about attending an HBCU. For my son, it was the most unpleasant experience for him because he was chastised for speaking “too white.” We all have our own biases, even within our own culture.
Q: What have you learned from attending a PWI?
A:  I’ve learned the real world.

Gregory King, Theatre Assistant Professor:
Q: What’s your experience been like being a black man on a predominantly white campus?
A: There’s this real need for diversity, but I don’t think they [Kent State] understand it in its truest sense of the word. They want you to look different but have the same way of thinking. They enjoy what I bring to the table, but they don’t want me to do it the way I do it. They like my voice, but not what my voice is saying. I can only protest police brutality if I do it the way you want me to do it. There’s always push backs and they provide me with a small space to evolve. In everything that I do, I have to make sure my Ts are crossed and my Is dotted and it’s exhausting.
Q: Do you feel like the spaces of PWIs forces students of color to change their blackness to fit into a white mold?
A: They’re just ignored. They become invisible. I’m no longer going to live in the shadows or mute my words and be careful, no. People don’t take the time to give us the chances because somehow we become invisible and they make excuses for it.
Q: What tips do you have for students of color who are interested in attending PWIs?
A: Don’t. The schools aren’t equipped with the tools that you need. Ask the hard questions. What resources do you have available for students of color? What events do you have for Black History Month?

A common debate in the black community is about going to PWIs and historically black college and universities, also known as HBCUs. The challenge is deciding whether PWIs or HBCUs are adequate spaces for black people to prosper.
On one hand, HBCUs offer a more intimate and close-knit community than PWIs. Black students may feel included from the very first moments they step onto campus. Student life on HBCU campuses is also amplified with a sense of fellowship and familial ties with everyone around. However, many question the rigor of courses compared to PWIs.
PWIs were established longer than most HBCUs and had the experience to develop a higher level of intensity required from their students. Another plus of PWIs is that they tend to hold more weight in the academic world. Athletic programs at PWIs are usually better equipped, compared to HBCU programs and facilities. Students tend to pay the price for these perks. At HBCUs, more financial aid could be readily available for its students than black students attending PWIs.
The most common opinions are that PWIs prepare students for how society is in the United States because they are the most marginalized. In comparison, HBCUs allow students to be in an environment where they see more people that look like them; for black people, by black people.
HBCUs were created because educated white people deemed black people inferior and therefore, were not allowed to enroll or were denied by universities. So institutions like Cheyney University of Pennsylvania, Howard University, Lincoln University and Wilberforce University, just to name a few, were founded to provide a place that would directly serve the black community.
Ultimately, the decision should be based on each person and where they feel the most comfortable, but it’s important to remember that black is beautiful and uncompromising and should never be dimmed to fit a certain space.