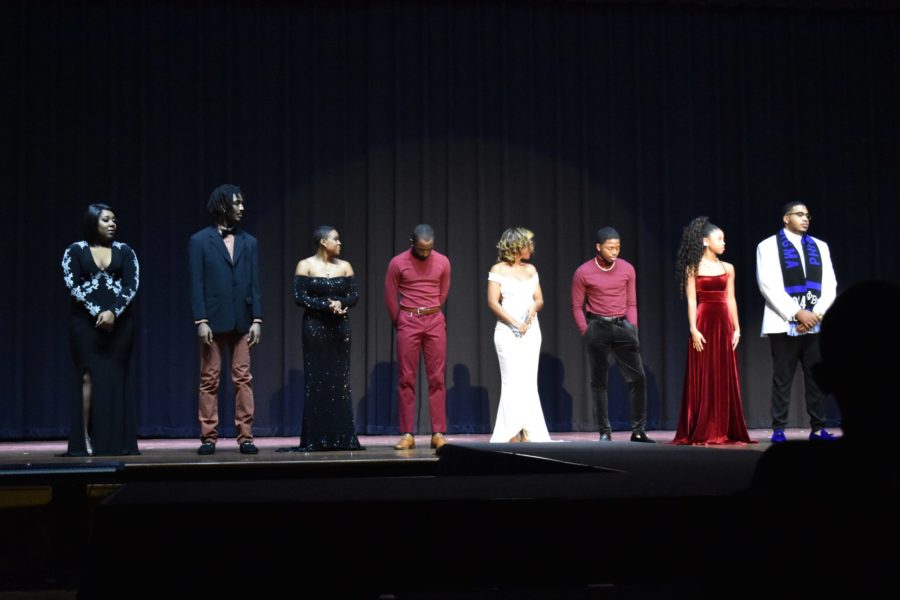 Black United Students gave students an evening full of excitement on Thursday, Nov. 14 with this year’s Renaissance Ball. Over 450 attendees filled the Student Center ballroom for the start of the event at 7 p.m. This year’s theme, Moonlight Masquerade was evident through the adornments in the ballroom and masquerade masks worn by some in attendance.

In the past, black students at Kent State University were not welcomed to participate in Kent State’s traditional homecoming events. As a result, Black United Students (BUS) created their own selection of black homecoming events in an effort to bring together the Black community on campus.

Black Homecoming Week is a week of events hosted by BUS featuring culturally relevant events, a comedy show and the highly-anticipated Renaissance Ball.

“I never thought I would be in this position when I first came to Kent State.”

Each year the event is, without a doubt, filled with amazing energy and fellowship amongst all who attend, and that same energy was brought five decades after its inception in this year’s ball.

Attendees dressed in stunning formal wear, put on full faces of makeup, freshened their hairstyles and cuts and prepared to mingle with peers that they may have not seen in weeks.

To some, the events’ significance extends beyond getting dressed up solely for good pictures for the gram.

“It has always been an opportunity for us to celebrate one another and revel in the myriad of things that make us special as a people. For those apart of the production, it’s not only a chance to connect with fellow students but to step outside of your comfort zone and showcase your uniqueness on a platform that has proven to provoke personal growth,”  said Taylor Ivey, a senior fashion merchandising major, and creative director and choreographer for this year’s ball, “In every aspect, the Renaissance Ball is for us and by us.”

After the show’s opening, the audience was introduced to the eight contestants competing (four men and four women) for the title of queen, king, princess and prince.

To start, C.J. Owensby, a senior Pan-African Studies major, took the audience to church with his notable performance. His musical rendition with a major contribution from The Impact Movement, an on-campus ministry, got the audience on their feet and proved that not all gospel music is “boring.”

Latrice Johnson, a senior fashion merchandising major, walks down the runway to Beyonce’s “Freakum Dress” during the talent portion of the Renaissance Ball.

The 2018 royal court crowned this year’s Renaissance Ball winners. After the crowning, each of the four winners exuded a joy that was magnetic from no matter where you sat in the ballroom.

“I never thought I would be in this position when I first came to Kent State. Receiving all of this admiration and support just feels very comfortable. It’s not only just winning King but also being apart of something historical and meaningful, inspires me to want to do more,” he said. “I thank God and my mother for giving me the strength and motivation to be the best me there is! I will always reflect on this moment and use it to strive for greater things in life.”

The hard work of each of the contestants was rewarded with great reactions and appreciation from the attendees throughout the event. Kristal Moseley, a freshman fashion design major, said the experience was rewarding, “Not because I was crowned Queen, but because I could tell by how the audience reacted during both of my poems that I had touched their hearts, maybe even struck a nerve,” Moseley said.

Paul Jetter, a   junior advertising major, performs an original rap for the talent portion of the ball.

50 years after its foundation, BUS continues to provide a space on Kent State’s campus where unique black art, talent, and accomplishments are not just tolerated but appreciated. From the signature pageant-like contest to good music, to the best-dressed contest and a scholarship presentation by the ladies of Delta Sigma Theta Sorority, Incorporated, the student-produced Renaissance Ball is the ultimate event for students across campus to be provided their deserved dosage of Black joy in the midst of the hectic semester.

The Moonlight Masquerade was a reminder of the excellence that is embedded deeply into the Black community at Kent State University, and the talents and gifts that students possess. This event is vital to giving students a well-needed push as they progress through the fall semester and count the days until next year’s ball.