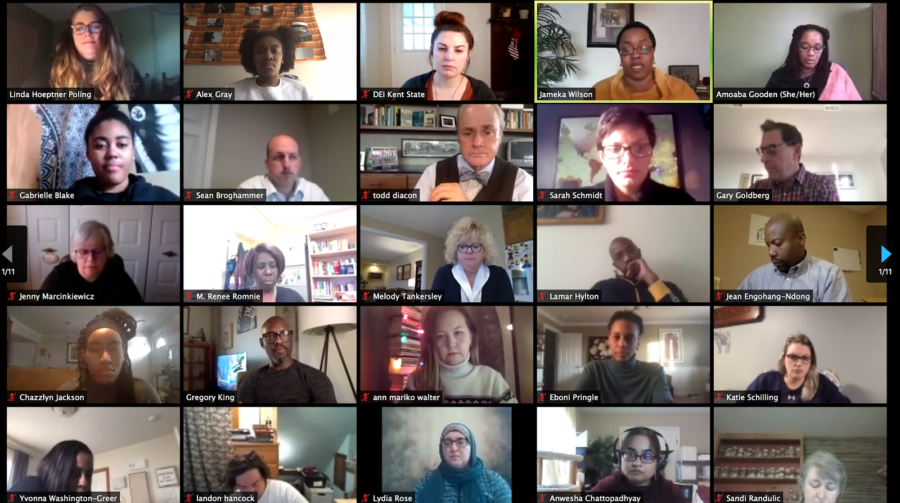 Over 250 logged on to Zoom on Thursday for Kent State University’s Anti-Racism Task Force town hall.

The KSU community came together to fight racism on campus after racist messages were written on the Rock.

Over 250 people were on Zoom Thursday night for Kent State’s anti-racism task force town hall. This was the first public mass meeting of the committee since it’s creation in early September.

The task force was created after Black students protested against racist messages that were painted on the Rock  in August. KSU President Todd Diacon, who attended the town hall, condemned the messages against anti-black racism both in September and during the meeting.

The meeting was led by Amoaba Gooden, interim vice president for diversity, equity and inclusion, who introduced the 14 subcommittees within the group. According to Gooden, there are about 170 students, faculty and staff who are currently a part of the task force.

“I’m very thankful to be working with members of this taskforce on these important initiatives. Your commitment [and] your dedication to Kent State but also just to greater humanity is admirable. And most of us are picking up this work as we’re kind of managing stress in our own professional and personal lives so thank you for that,” Gooden said in the Zoom call.

Each subcommittee gave various recommendations and long term goals for Kent State to improve its efforts of anti-racism and inclusion. Some committees included were safety and security, academic curriculum, and mental health.

Ann Mariko Walker, an associate lecturer and academic curriculum co-chair, spoke about her committee’s efforts to develop a new diversity statement that will be included in all syllabi on campus. Though they are currently in the research stage, the committee plans to complete his goal in the next six to eight months.

“A couple of important considerations, as we do this, is articulating to students why being inclusive matters in a statement,” Walker said. “Considering a broader range of diversity types, beyond what we might think of as traditional categories such as observance of religious holidays, reproductive status, etc.”

Questions about Aramark were also discussed during the town hall after Gary Goldberg, Assistant Vice President of Student Services and Affairs, mentioned wanting to do more outreach to local and diverse businesses, including food vendors.

One commenter asked if this meant Kent would cut ties with the multibillion dollar corporation that many students and student workers have protested in the past.

“In reference to Aramark, we have a long term contract. But being true to this process we will evaluate all of our strategic partners and what we expect them to represent,” Goldberg said in the chat.

The recommendations talked about in town hall are expected to go to multiple bodies across campus. The next town hall is set for April 2021.