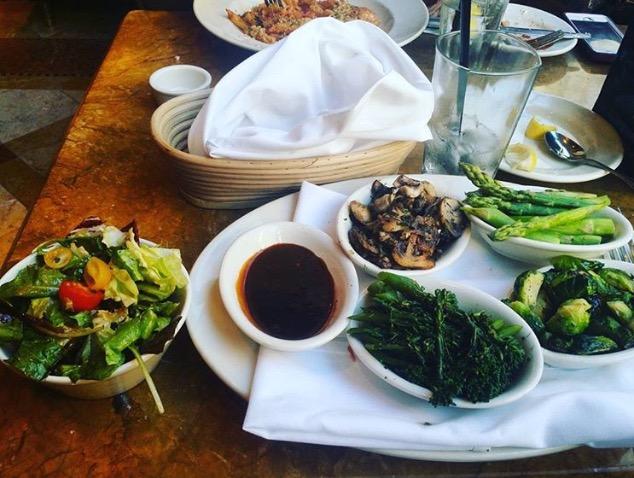 Indulging in a meal that is good for the body and soul. Photo courtesy of Rena Wilson.

Soon after graduating high school, I took it upon myself to navigate towards living a holistically healthier lifestyle. Learning that it takes a clean body to produce a clean mind and spirit, I began to realize just how important it is to eat healthy, especially as a young, Black college student. About a month into college, I quickly decided to become a vegetarian, and I can say it was one of the best decisions I’ve ever made.
As I maneuvered through my vegetarian journey, meat was not the only thing that I gave up. All fast food, junk foods–including anything canned and boxed, artificial fruit juices, sugar and anything along those lines–slowly began to leave my plate as well. To no surprise, I lost a lot of the weight that I’d recently put on, which was greatly desired; but greater benefits came along with the change as well, such as healthier skin and hair, boosts in energy/positivity, as well as almost never getting sick.
The more that I began to truly learn about health, the more I had to unlearn everything that I’d been taught. This was the peak of my shift towards a holistic natural lifestyle. During this time, I began switching to fluoride-free water and toothpastes, as well as natural deodorants, hair products and natural remedies for illnesses. Later on that year, I decided to go full out vegan–refraining from all animal products such as dairy, eggs, etc.

One of best things about this journey was realizing that I wasn’t alone. Over the past three years, I’ve noticed a mass shift of health-conscious students of color here at Kent State. Former Pan-African Studies major Rena Wilson, also known as Satiah Ma’at, told me that she’s not only vegan, but she’s also raising her son Obatallah to be vegan as well. She buys most of her food and necessities organic and usually home-makes her own personal products, such as baby wipes.
Darnell Griffiths, a senior Hospitality Management major, recently informed me that he’s on a transition not only towards becoming a vegetarian but towards eating healthier overall. “I started reading into what’s in our meat recently and I was disgusted!” he said. “Also, I have been working out a lot these few months and trying to be healthier. The combination of the two made me want to start a life change. Now, I still eat chicken; but it’s a continuing process.” These are just a few of the students I have met who are journeying towards living a healthy lifestyle. Not only have I met many vegans and vegetarians here at Kent State, I have also met meat eaters who’ve given up all pork and red meats, others who frequently detox, and others who are even taking on paleo and all organic diets as well!
Being Black and being college students, we are huge targets for unhealthy foods, and it makes me really happy to see so many of us deviating from such a crippling norm. Over the years, I’ve even noticed a great decline in the number of students of color who attend Soul Food Night at Eastway, because the food served there is not “food for the soul.” To any of you students interested in at least trying to incorporate healthier foods into your diet, I strongly encourage you to do so, and I promise that you are not alone. There are so many people on a similar path who look just like you, here on Kent’s campus. It’s time to reclaim our minds, our spirits and our bodies as well.